While New Zealanders can be assured they are not being bombarded with “fake news”, there is evidence of misleading behaviour from some political parties, researchers say.

Victoria University researchers Dr Mona Krewel and Professor Jack Vowles have been leading a team of coders examining the use of social media by political parties during the election campaign, and have already analysed well over 1000 Facebook posts placed by the parties and leaders over a two-week period.

Dr Krewel says the parties that are already in Parliament have not been sharing fake news, but some have been sharing posts with “half truths”.

“We actually had a very conservative approach when we coded that so our research probably underestimates rather than overestimates what is there on fake news and half truths because we didn’t want to accuse the parties for just the usual different positions within political communication.”

“To give an example fo half truths, we have seen a post by National that was saying that they had a poll where they were leading 43 percent over 39 Labour for New Zealanders trusting the parties and who can recover the economy … but the graph they were posting that was coming with that actually kind of showed that the bar for Labour was just half as high as the one for National.”

She said some of the parties outside Parliament – Advance NZ and the New Conservatives – seemed to be spreading more half truths, and were also spreading some fake news.

Advance NZ was the worst offender with 31 percent of its Facebook posts considered half-truths and 6 percent entirely fake.

The research is also measuring positive versus negative campaigning. Individual posts can be both positive – meaning it had supportive, encouraging, affirmative, beneficial or assertive in nature – and negative, meaning they are aimed at criticising a political opponent.

Labour, which at the last election billed itself as “relentlessly positive” and whose leader Jacinda Ardern has insisted she will not run a negative campaign, appears to be largely living up to that. Labour had the fewest posts attacking other parties.

Interestingly however, the National Party had a slightly higher percentage of posts with a positive sentiment. 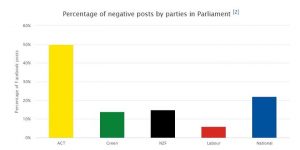 Floating bliss to glide down the Waikato River at Taupō

The Waikato is known for its rolling plains, fertile land and the mighty Waikato River. The region is the fourth largest regional economy in New Zealand, with a strong focus on primary production and associated manufacturing.

The Bay of Plenty is officially New Zealand's sunniest destination, enjoying short-lived winters and long summer days. The Region offers some of the country's most spectacular views and many ways to enjoy the pristine scenery and natural wonders. Visitors also enjoy exploring the Bay's Māori heritage and pre-European roots.

A warm welcome for international students to Waikato

Students get a taste of Japanese life at Bunkasai festival

Government warns of increased risk of foot and mouth disease

Native tree proven to be an effective treatment for eczema